Oh my, it’s poetry/music/comedy/conspiracy theories night in Avondale once again with another installment of the Kill Yr Idols Reading Series. It’s gonna be the perfect blend of silly, serious, and BYOB. Come thru; listen to talented people and a book or three.

Some fine young men have ventured forth to see this land tis of thee and they are not happy about the results. BUT, their next stop is Chicago. And they're going to read here. Let's show up and argue with them about pizza or some other dumb shit that doesn't matter.

Come hear the mermaids singing, each to each. We will sing and/or read to you if you join us at Space Oddities to celebrate the start of the end of the summer.

Jessica Baer received their MFA from Brown University in 2017. They have a chapbook called Holodeck One (Magic Helicopter Press, 2017), and their work has been featured in journals such as Pinwheel, Prelude Mag, and Bone Bouquet. They live in Chicago and they love horses.

Daniela Olszewksa is the author of several books of poetry and short fictions. She was born in Poland and received her MFA in Alabama, but she self-identifies as a Chicagoan.

Eddy Ozoma is a Nigerian-American from Alaska living in Chicago. He received an MFA in fiction from the Bennington Writing Seminars, and now he's a bookseller paying off his student loans. He misses the mountains and the stars, but loves the city. He writes.

Becky Wills is a member of the Poems While You Wait collective. She edits for DiningOutmagazine, a Chicago-food journal. Her writing has appeared in Gigantic Sequins and While You Were Waiting.

The Chicago Flagship reading/fundraiser for "Writers for Migrant Justice" takes place on September 4, 2019 at 7pm at the The Nightingale.

"Writers for Migrant Justice" was launched in order to support the groundwork being done by Immigrant Families Together. Online, we want to raise $5K by Wednesday, September 4th in order to support detained/formerly detained migrants. Visit the page: https://bit.ly/2O3BkJa

So far, there are flagship readings in more than 40 cities including New York, Los Angeles, and Chicago. This direct action is being led by Undocupoets/organizers Christopher Soto, Javier Zamora, Anni Liu, and Jan-Henry Gray. The Chicago reading will be hosted by Nabil Vega and Xandria Phillips. 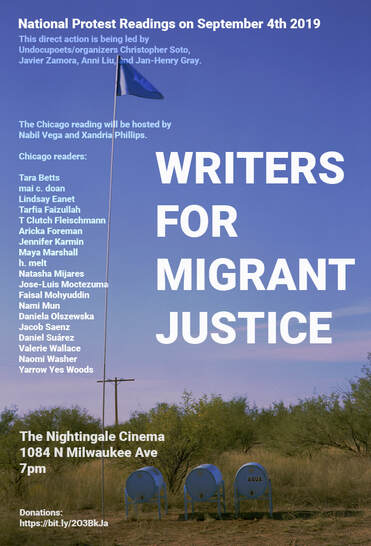 
Adrianne Beer is a graduate of Bowling Green State University, where she received a BFA in creative writing and BA in communication. Her work can be found in Moon City Review, Chicago Reader, Entropy, and elsewhere. She currently works at a community health organization.

Andrew Cantrell is a poet, first-generation (former) academic, labor activist, and working-class southerner living in Chicago. He is the author of the chapbooks PHANTOM EQUATOR (above/ground press) and STRATIGRAPHY (Finishing Line Press), and his work has appeared in many places, including Posit, Lana Turner, Black Sun Lit, and Rust Belt Chicago: An Anthology. He is a Pushcart nominee, and was a finalist for the Hillary Gravendyk Book Prize. As Local Projects, he has performed at venues including the Logan Center for the Arts and the MCA. He is a founding member of the Graduate Employees' Organization at the University of Illinois, and served for 10 years on the Executive Board of the Chicago News Guild. As a union organizer, he has organized hospital, industrial, and educational workers across the Great Lakes region and in southern California, including most recently support staff at the City Colleges of Chicago - where he helped organize a victorious strike on May Day - and teaching artists at the Old Town School of Folk Music, whom he is helping negotiate their first union contract.


Christine Kanownik is the author of HEAD (Trembling Pillow Press, 2019) and KING OF PAIN (Monk Books 2016). Her poetry is can be found at FENCE, Diagram, Cosmonaut Avenue, jubilat, among others. Her chapbook We Are Now Beginning to Act Wildly was published in 2012 by Diez Press.


Maya Marshall is a writer and an editor. She is co-founder of underbellymag.com, the journal on the practical magic of poetic revision. Marshall has earned fellowships from MacDowell, Vermont Studio Center, Callaloo, Cave Canem, and the Community of Writers. She works as a manuscript editor for Haymarket Books and serves as a senior editor for [PANK]. Her poems have appeared in RHINO, Potomac Review, Blackbird, and elsewhere.

Andrew Farkas is the author of a novel: The Big Red Herring (KERNPUNKT Press), and two short fiction collections: Sunsphere (BlazeVOX [books]) and Self-Titled Debut (Subito Press). He is a fiction editor for The Rupture (the new iteration of The Collagist) and an Assistant Professor of English at Washburn University. He lives in Lawrence, Kansas.

Adrienne Dodt is a poet and sometimes essayist. Adrienne's chapbook RETURN was published by Damask Press in 2015. Ze also has a poem featured on the X-FILES tribute EP PURITY CONTROL, released in 2015 by What's For Breakfast? Records/We Used To Drink Together Records. From 2013-2016, ze was a regular contributor to the SPOON RIVER POETRY REVIEW blog. Ze was the Poetry Editor for BOMBAY GIN magazine in 2008-2009, and ze edited the Next Objectivists' chapbook COLLECTIVE UNCONSCIOUSNESSES in 2011. Other works have appeared in THE BODY ELECTRIC anthology and FACT-SIMILE, APOTHECARY, MONKEY PUZZLE, and CON/CRESCENT magazines. Most recently, zir play THE WEIRD SISTERS was performed in October 2019. Adrienne teaches English as a Second Language in Chicago.

Stefania Gomez is a queer writer, audio maker, and teaching artist from Chicago's South Side. She received her BA from Brown in 2017, and has work in the Offing, the Missouri Review, and Sinking City Review. She is the author of the chapbook ONCE I LOVED A COWBOY (Ghost City Press, 2019). She works at the Poetry Foundation.

Nate Logan is the author of Inside the Golden Days of Missing You (Magic Helicopter Press, 2019). He's editor and publisher of Spooky Girlfriend Press and teaches at Marian University in Indianapolis